I firmly believe, and its possibly due to too much tv watching as a  child, that your dress should match your profession. Thus, Millers should wear straw hats and smocks, business non-distinct dark suit and bowler hats, and firemen shiny brass-buttoned coats to and sturdy boots. Would Windy Miller, Mr Ben or Pugh, Pugh, Barney McGrew, Cuthbert, Dibble and Grubb be so locked into my happier childhood memories if they had turned up for work on a Friday in Chinos and a grey t-shirt? As such, I like my doctors to be necklaced in a stethoscope over their white coats, my teachers  in full corduroy, replete with shoulder patches, and my builders in plaid shirts and showing enough arse-crack to park a moped in. I, as a writer*, obey these rules by wearing stained clothing, a hat with a chewed pencil in its brim and a worrying penchant for alcohol-based lunches. Its standards. Unless you’re a cowboy, and you’re not, jeans are inexcusable in the workplace. Standards.

As such, scientists should look like scientists. “Pray tell, Lord of all Beestonia (and nice districts like Attenborough, bits of Chilwell and Wooly Park), what does a scientist look like?”. Well, its a bit of a recipe. Test tubes and Bunsen burners out please, and no drinking the iodine…

You need 3 parts Einstein, two parts Professor Yaffle off Bagpuss, and a splash of Back to the Future’s Doc Brown throw in a pair of studious, heavily framed specs…. 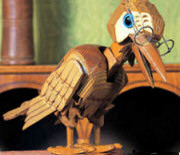 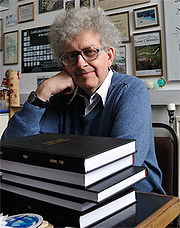 Isn’t he? I hear the nodding from here, the seismic wave from your united heads bobbing across the town and making my drink go all Jurassic Park. Look at the hair. Not just white, not just bushy, but BIG. The glasses: big, rounded, and worn as if he was born in them. The jumper/shirt combo: you can almost see it gasping for air after years encased under white overalls. The mildly deranged smile: check. Its all there, everything. This man could never be a quantity surveyor, could never be a HR clerk, never, ever be a train driver…this man is, always will be, and possibly was always A SCIENTIST.

I love scientists. I myself once harboured ambitions to be one, but then just before buckling down for my GCSEs was convinced by cooler types that science was square and it was all about English lit and language, thus decided to dedicate my career path towards the written word.  So blame those people, cos if they hadn’t so distracted me from doing this: sitting typing bollocks for six people to read a few words of before realsing they’d mistyped ‘ESTONIA’ into Google, I’d be possibly investigating the beauty of quantum or breeding seven headed toads whilst explaining to audiences that Dark Matter is not an area of Stapleford…but alas Im not.

But what the Dickens has this got to do with Beeston???? Calm down, Im getting there. But first, a true tale. Im living in the Rylands,, in a shared house, its 2003, and we-my female housemate who I shall call  Linda cos it was her name, and myself, are watching the evening news, and theres footage of a search for a body after a suspected murder. Lines aof police are relentlessly, painstakingly trudging forward, heads down, over a rainswept  , barren moor, looking for clues to lead them to the corpse. Linda, who I had previously suspected of below average intelligence due to her steadfast belief that Do-dos had’nt died out, they were just good at hiding- turns to me and says ‘Dunno why they bother with all this’

‘All what?’ I reply, as the rain beats down on earnest-faced PCs.

‘Looking for the body. Dunno why they just don’t get a clairvoyant or psychic in to look for it’.

I give this the amount of time it deserves for consideration, and instantly reply ‘Well, its not very scientific, is it?’

“Science?” she replies, and half a moment before my jaw goes crashing from its usual position below my upper jaw right through the floor, the foundations, the crust  of the earth, rushing past fossils of mammals, dinosaurs, and primitive fish, scolded by the core, then emerging somewhere in an Australian bar, momentarily frightening a bar full of  Larrikans before rushing back up….before that, she says:

‘What has science ever done for us?”

Try answering that without violence. I couldn’t -I mean, I didn’t try, without or with violence- I just decided to always give science an inordinate amount of respect, as too many idiots out there would always underestmate this importance. This is also true regarding the music of Pulp, brussel sprouts and Swindon.

Those who havent left are still asking, yes, I hear you: “What has this got to do with Beestonia?”.  Ok, you should already know. Cos a good Beestonian would have been in the town centre and got familiar with the locals enough to realise the above scientist is not just a scientist, hes a Beestonian scientist. Lives right near my landlord, is often seen walking around our fair town with a serene expression on his face. But thats not all.

His name is Martyn Poliakoff. Does that name ring any bells? Yes, thats right, hes the brother of acclaimed director Stephen Poliakoff. What do you  mean ‘Who is Stephen Poliakoff?’. You brutish philistine! Hes ace, and in no way did I have to go on Wikipedia to tell you that he is, errr , widely judged amongst Britain’s foremost television dramatists. And theres MORE!

This is the best bit as well, as reward for reading this far. Professor Poliakoff has also got his own Youtube channel, and its brilliant. Its science, yes, but its science that you will love. He has a weird charisma and a great way of explaining stuff that I know you’ll love. And if you don’t? Well, back to the dirt and the ignorance and that   question that will forever elude an answer…’What has science ever done for us?’.

One thought on “SCIENCE!”