Impossible to miss the giant Let’s Go To Beeston sign plastered over the derelict fire station this week:

…which swiftly got spoofed by a talented photoshop genius…

Very funny, indeed, though a little unfair. First off Beirut is actually thriving after a sustained outbreak of peace, and is starting to attract tourists and traders 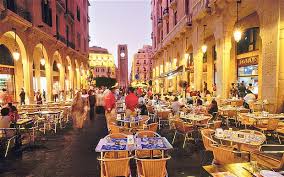 But joking aside, I think the sign is a positive thing: it definitely makes the approach into a Beeston a damn sight more attractive than the disintegrating fire station. It’s not the cure-all for Beeston’s present ills, but a damn sight better than the god-awful Pop-Up Cinema that is due back next Saturday.

Anyhow, Soubry has met with Jon Collins and came galloping back to Beeston with £50, 000 to divvy out amongst Chilwell Road traders who are suffering with the tramworks. It’s worth congratulating Anna on this, even if I have to repeatedly punch myself in the face whilst doing so. Though once shared out, I imagine the amount doesn’t really to more than a few weeks rent per business, if that.

Incidentally, Soubz has at last got her ambition and became an institution on Chilwell Road. Well, a bit more than that, shes listed as a monument on Google Maps:

Hopefully a small tonic to the street will be next week’s Ceilidh at Bartons: it’s the second one Oxjam have ran. As one of the coordinators, I’m quite excited about this as last year’s was fantastic, and rose a handy chunk of money for charity. I’ll be behind the bar for this one, so you can make me entirely jealous (I’m still teetotal) by buying lots of lovely beer, this time round a bespoke Beeston Oxjam brew courtesy of Magpie Brewery. We’ve almost sold out, so get your ticket asap here: https://www.wegottickets.com/event/235109 or from Oxjam Books and Music / The Guitar Spot.

We also have great news regarding Oxjam: The Jar Family, one of the stand-out acts last year, have kindly agreed to play TWICE this year, opening for us at Broadgate Park and then playing Bartons later that evening , with erstwhile Rock City DJ, Weakest Link loser  and present day comedy impressario Spikey Mike  compering the night’s fun there.

Fans of music don’t have to wait that long to satiate their musical longings. Tonight (Sunday) at the Hop Pole sees the second heat of the long-running Songwriting Competition, and I’m a judge. Makes me feel a bit guilty: I have to assess people doing things I can only dream of doing: singing in tune, playing an instrument, writing songs and not making an absolute idiot of themselves every time they use a microphone

We kick off around eight: come down and hear The Future Sound Of Beeston live and loud.

Prefer films over music? Buy Empire and eschew Q? Then we have a treat for you too. The revamped Beestonian Film Club at Cafe Roya is back this coming Monday, with a Persian theme. We’ll be showing a fantastic Iranian film Women Without Men (trailer below) and serving up a portion of Roya’s very special Ash-e-reshteh ( a Persian herby stew with noodles) to get you in the mood. All for an incredible £5. If you fancy a ticket to this culinary and cinematic treat, drop me a line asap at thebeestonian@gmail.com and reserve tickets.