I was hoping to cruise through to Oxjam without spleen being vented at any pet peeves. I was hoping I could get to the 19th using this space to tell you of the wonderful stuff we have for you on that day, the great bands, the wonderful raffle, the fantastic fun that your fiver will buy you.

But then stuff happens, and I have to write about them. Two instances of hypocrisy that cannot pass without comment. We’ll start with our favourite non-Beestonian/ committed Mapperlian, MP Anna Soubry.

I’ve pointed out, here, how Anna’s website proudly quotes The Independent’s parliamentary sketch-writer Simon Carr and his observation that she ‘..has a record of unusually free-speech’, and how her definition of ‘free speech’ extends no further than her own speech. Dissent, differing opinions, pleas for consideration: se is deaf to them. And today she showed again what a horrific hypocrite and Cameron lap-dog she is by voting for the ‘gagging-law’. This legislation, thrown together by the coalition to pretend it will stop the scandalous lobbying that goes on in Westminster, is a pernicious attack on free-speech, effectively gagging charities and pressure groups from speaking out.

38 Degrees, the pressure group that Anna has already claimed were ‘a left-wing front’ that she could comfortably ignore, will be as god as outlawed. Greenpeace, Oxfam and many other charities will be hit hard and gagged from commenting on Government business. Dissent is being outlawed. Think I’m being hyperbolic and scare-mongering? Then check out this quote from the National Council for Voluntary Organisations:

Or we could look at Greenpeace’s reaction:

Yet that beacon of free-speech Ms Soubry still voted for it, in line with her hatred of any collective or individual dissent against the Government policies she obediently votes for to ensure Cameron keeps promoting her and gives her a large campaign war chest come 2015. ‘

‘I’ll be Broxtowe’s voice in Westminster’ she repeatedly promised when touting for votes. And she’s right. Should the Lords not strike out this incredibly vile law then she’ll be the only voice from Broxtowe allowed to be heard down there. And don’t for a minute believe it’ll be saying anything that you’d like it to say.

Another free-speeech question is on the table tomorrow as we get a clearer picture of what the post-Leveson set up will look like. I’m not going to comment too much on this, it’s a complex subject and a lot more nuanced than either the press or Hacked Off care to admit. But in line with most sane people in the this country, I can safely say that The Daily Mail is Scum and Hates Britain.

The Miliband thing was awful, but we’ll get round to that in a bit. First, let’s look at the story of a news story.

Chatting to Roya the other day, she mentioned that the landlord and lady of the White Lion had recently had a baby, born in the pub. I check if this is correct, it is, I put it on The Beestonian Facebook site. A reporter from the Nottingham Post rings me and asks about it, I give them as much detail as I can, they take it up.

I have a job that afternoon at a gym near the White Lion, so I ask my photographer Lewis if he fancies popping in and taking a photo. We arrive just as the Post do, so we all take a few snaps and get a few words. We put our picture online later that day: 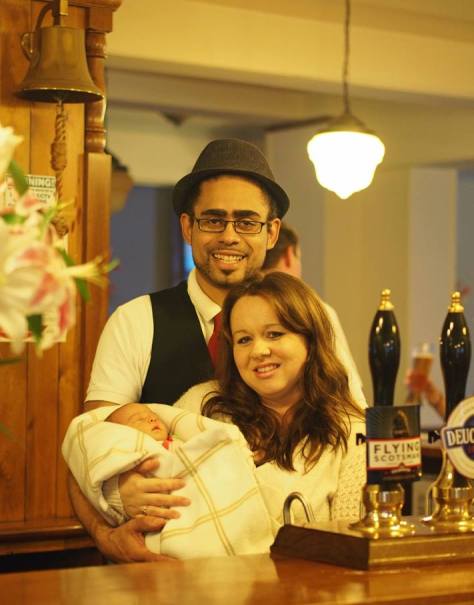 …and the Nottingham Post run it as a feel-good front page story: http://www.nottinghampost.com/Landlord-delivers-baby-pub/story-19846060-detail/story.html

Both are well received: it becomes our Facebook page’s most liked post. Smiles all round then? Not quite.

I saw Sergio a few days later and he’s not too happy about the coverage. It’s not  a problem with our reporting, and he’s delighted with The Nottingham Post. He’s not so happy about The Daily Mail and The Sun running the story, and throwing in some lies and made-up quotes.

‘We named her after our best-selling lager: Stella!’

…is how the Mail reported it. Except this is an entirely invented quote: the baby is named Estrella, Portugese for ‘star’. Not after the fizzypiss lager. Which The White Lion doesn’t even sell. It goes on to claim that the baby was born ‘in the bar’ while the baby’s mother, Natalie was serving drinks: again, this is lies. Natalie, who by then was 11 days overdue, was resting upstairs in the flat she lives in with the kids. Yeah, it’s a better story to say it was born in the bar, but, y’know, it’s a fib.
It gets worse:

Today Sergio revealed the names picked for his daughter were ‘truly fitting’, as Stella lager and Rosi wine are two of his best selling drinks.

He said: ‘We really liked the name but coincidentally they are also two of the drinks we serve – Stella and Rosi . It’s also a bit like Estrella Damm, which is also a favourite of mine.

‘I’m not a big drinker but it’s truly fitting really being that we run the pub together. To deliver my child was a magical moment.

‘It was all a bit surreal for the customers – they didn’t know what was going on at first. The pub wasn’t that busy as there’s a lot of road-works going on at the minute, but I suppose that made it a cheaper round.

‘There’s going to be plenty of time to celebrate properly with all the regulars though, it was quite a magical moment.

Utter bollocks. Sergio didn’t say any of this to anyone, let alone the Daily Mail. Anyone who has chatted to the lovely chap will also know he doesn’t talk in these snippy little tabloid quotes. Some soulless hack was told to puff up the story, so rather than ring for a few quotes, just threw whatever they fancied into the mix. Her name is Martha De Lacey, and I’ve asked her via Twitter why she lied. I’ll keep you updated.

The Sun also ran a similar bollocks story, but it’s behind a pay wall and I’d rather eat my own toes than give the cancer that is Murdoch any cash. Sergio assures me it is just as crap.

I know it’s not on the same level as the Ralph Miliband smear, or a thousand and one other vile acts the Hate Mail gets up to on a daily basis. But it is another depressing example of how the press works. Sergio saught legal advice but was told by the solicitor not to bother; The Daily Mail / The Sun are far too powerful to fight. As for the Press Complaint’s Comission…well, they are well known to be more toothless than poor little Estrella Rose.

As this article shows, the definition of free speech and a free press is often skewed for the use of those who seek to deny it to others. So while I still legally can, I’ll have a crack at comparing the man who really hates Britain, Paul Dacre, with Hitler. And throw myself onto a bandwagon that was stale seven years ago…