Friday night, and instead of heading straight from work to the pub, a load of you came down to the Civic Society extra meeting, where myself and other members of the Continuum Beeston steering group announced our findings and thoughts. 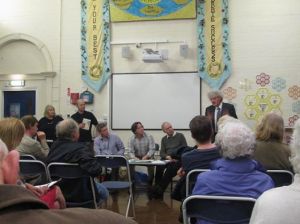 The most significant element of the meeting was the proposal put forward by Professor Martyn Poliakoff, who as well as being a extraordinary scientist, member of the Royal Society and Youtube star, is a proud Beestonian, raising a family here, his kids even attending the same school we held the meeting in.

The concept is quite simple on the surface. Beeston’s future could lie in becoming a ‘sustainable town’, hosting an iconic, futuristic building built using cutting edge technologies: something that will draw in visitors, and as such further businesses.

This would be designed by way of a competition between the large amount of architecture students at the University of Nottingham. Tapping this huge amount of talent is a fantastic idea, and a two way street: they get a great, real-world project to work on; we get a fantastic structure that will shape the way Beeston develops. The University hierarchy have already been sounded out by Professor P, and are very keen on the idea: we’re talking right the way up to Vice Chancellor here. At last, the often remarked upon potential of having a huge Russell Group University in our backyard will be tapped. Town and gown symbiosis. Other organisations have been contacted, and are keen to get involved.

Such an organisation is Attenborough Nature Reserve. As they are listed as one of the world’s top eco-destinations, they have already blazed a trail for putting us on the map. By linking up to them, and also featuring the hydro-electric plant at Beeston Weir, we already have a strong presence. An iconic building / town plan would crystallize this into something incredible.

Of course, funds would have to be found to build it. Developers step in at this point: we get a fantastic concept together, backed by the Uni, the Council and, well, us, the people who live in this town, and throw us much media attention and detail in as possible and they’d be queuing up to take on such a prestige development.

How would this revitalise Beeston? First, we’d become a tourist draw. Prof P pointed out that the present Centre for Alternative Technology (CAT) is tucked away in Snowdonia, in the hard to reach town of Machynlleth. If we had something similar here, we might not do so well on the scenery but the ease to reach us from anywhere in Britain would be a strong draw.

This in turn would show we were not just any suburb,but somewhere truly unique, not overshadowed by Nottingham or sinking into the grey dullness of a dormitory town. It would be bright, ambitious, and square that seemingly impossible circle of bringing the University into the community. Such links, on a purely economic level, are massive.

The idea, expressed with much more depth and eloquence by the good Professor at the meeting, seemed to go down very well with the audience. Their is a lot of detail to sweat over if this is done, but the energy is there.

That energy needs to keep flowing. We need to not let this idea slip, and to do that, we need to get Beeston talking about it, Beeston behind it. We need YOU. It was noted on the night that the average age of attendees to such meetings was always quite old, and not reflecting the true demographic of the town. True, inevitable in many ways, so we need to get this idea disseminated and discussed amongst the people who will truly reap the benefits: the young. Linking in schools, bringing more University outreach into town: all these will greatly help.

I am going to keep writing about this as I get news: one of the complaints we received regarding the Continuum was a lack of transparency: I am to blame for that having to miss the last meeting (I was on my stag night, and even someone as nerdishly obsessed with civic duty as myself chose to go dancing instead).

I need you to get the message out, get people reading this blog, getting ideas over and creating a buzz. Feel free to write to me directly either through the comments section of this blog or to my email account, mattgoold23@hotmail.com . We need to see if this idea works for you, as residents of this town. If you can offer further support, then please don’t be shy to come forward. I will ensure that your correspondence is read, and kept to enrich the debate: due to getting married on Friday then disappearing to a Scottish glen for a while, out of any wi-fi or phone signal reach, I can’t promise to individually answer.

This could be the start of something incredible. We could change this town forever, on our terms. Let’s get to work.

A huge thanks to the Civic Society, for arranging this extra meeting. I don’t believe it would be possible to set up an initiative like Continuum Beeston without their help: their depth of knowledge and experience, attained over the forty years of existence, is breath-taking. To join, and it is really worth doing, or to find out more (I’d recommend their upcoming series of heritage walks), pop over to their website here: http://beestoncivicsociety.org.uk/

And just a brief plug for something I’m doing this week: The White Lion is starting up a monthly quiz night, running the second Tuesday of each month, and I’ve volunteered to host it. The first one is this Tuesday, from around 8pm, and free to enter a team. There will be booze-based prizes, as well as a rare and much-coveted Beestonian t-shirt up for grabs. If you’d like to come along, then I’ll see you there. And no, it won’t be easy: I’m cobbling together 40 fiendish questions to vex and perplex, right now.