The Beeman has been yarn-bombed! Local Kirstie C took this snap yesterday morning and  we think it’s very fetching. But who did it? So far our investigations have proved fruitless: but we have a prize for anyone who can shed light on it. Send an email to thebeestonian@gmail.com

A few months ago, I got a call out of the blue from a stranger who wanted a copy of The Beestonian delivering to them as they were unable to leave the house and had trouble reading it online. we ended up having a lengthy discussion about Beeston through the ages, and but when we got onto the modern day, she said something almost Confucian in its simplicity and depth:

She was exactly right, of course. A similar sentiment was expressed, although less succinctly, at the recent Civic Society Beeston New Deal Public Meeting. Philip Horsfield, Head of Legal Services, started his speech by saying ‘Whatever you do, you will be criticised. That is inevitable. But we will never be criticised for doing nothing’.

I’m not going to give you a full report of the meeting; I made a series of observations and posted them on a Facebook post for The Beestonian which you can find here by scrolling down a few posts.  Nick Palmer also wrote up a synopsis, as did Karen from the Civic Society, as an official report. All vary in interpretation slightly, but read together provide a comprehensive idea of what is happening.

The overwhelming feeling I got through the meeting was optimism. Local Government funding is at a low right now, with Broxtowe being hit by the worst deal in the whole UK at the last round of allocation. None of the main parties seem to want to change this post-May 2015, and councils are terrified to put up Council Tax to mitigate. So funding looks like it will drain from the councils coffers over time.

So why optimism? Because despite this, Beeston is moving, and moving fast. Whatever your opinion of the tram -personally I’m a pro-leaning agnostic – it is something. It’s also a huge amount of central funding that wouldn’t otherwise be here. The tram argument has become increasingly bitter over the last decade, rising in shrillness since construction began. Lots of heat has been generated, but little light. Here is a cool-headed take on it:

For those adversely hit by the tram, such as those on the route who have had their homes under siege for the past two years, and businesses hit by the works; these people deserve our full sympathy, and more importantly, compensation to make up for the patience they’ve been forced to exhibit. Making this a political football is in bad taste. Working together: NET, BBC, NCC and the County; not in conflict with each other. That is a priority. Not an election strategy.

For us who don’t live on the route, but have been hit in other ways due to the abysmal traffic, confusing detours and suchlike, our compensation should be – and I use ‘should’ with caution – a better town. The polarising effect of the tram debate has led to some opposing it being completed, and its very existence. Yet investors in the town, developers, businesses, and even individuals who are looking for somewhere to settle; they are the benefit, the compensation to us. Beeston is attracting more investment than ever before, with businesses seeing the potential of a town with excellent transport links, reduced parking pressure and lying on a key route off the M1. Land prices are rocketing, with Broxtowe Borough Council recently deciding unanimously to retain land that would previously have been a useless liability. Wilkos will return soon, and expect some announcements of other exciting retailers and businesses deciding to shut up shop here, over the next few months.

So stuff is happening. Stuff happens. That’s what keeps a town alive. I grew up in Stapleford before I moved to Beeston, and saw what happened when a town doesn’t move. Over time, the town was neglected, with little investment going in. Shops closed, traffic worsened, the place became a shabby mess. It’s in a process of regeneration now, but only through the work of advocacy groups getting money allocated.

Those that would have preferred Beeston to stay as it was, I have a certain sympathy with but cannot support their view through it’s simple lack of logic. I was recently asked online about Argos: what was it’s future? I replied that it was yet to be decided, but is being looked into for development. The questioner responded by moaning about ‘losing another piece of Beeston’s heritage: we must stop destroying Beeston’. Another respondent was quick to point out that a 1970 bit of decrepit architecture that probably looked dated in 1971 is not heritage.

An easy example, of course. But where do you draw the line? Looking at old pictures of Beeston, with it’s Mock-Tudor fronted Square, its roads cutting through the town before pedestrianisation; was that the golden age? What must it have been like to stop cars going down the High Road? There must have been outrage, though in those pre-internet forum days spleens would have been vented via newspaper letter columns and angry missives direct to the council. Before that, when Rylands was built on acres of open field; what was the outrage at the rivers of concrete and cement flowing over the verdancy? When stone age man first made camp by the Trent, did he get complaints from the Neanderthals a bit further down the bank that his hide-skin shelter didn’t fit the local ambiance?

What is this Golden Age? What is this idyll, this halcyon period before the rot set in? To people like UKIP, it is some imagined 1950’s utopia, before the Beatles and after the Chatterley ban. They forget the smogs, the poverty, the stiff-collared repression. We all hark back to our own mythical Albions, all as real as Eldorado. Mine is the long hot summer of ’92. I remember the cider, the festivals, the music. I forget the hangovers, the rain, the skintness.

In the early nineties, I briefly lived in Newcastle upon Tyne. Debate raged at the time over the proposed Angel of the North. In every pub, on every radio phone -in, on every newpaper letter’s page angry Geordies predicted it would bring ruin. They were vocal, and dominated the airwaves and column inches. Yet surveys found most locals optimistic about it, and now, twenty years on, it enjoys near universal acclaim. On a smaller scale, the Beeman on the High Street – Sioban Coppinger’s Beeston Seat – was hugely controversial when it was first proposed, and even on the day it was put down protesters demanded it be torn up and taken away. Yet now it is so part of the fabric of the town it’s impossible to imagine it gone.

Live things change. Beeston will, I hope, always be a changing, live thing. As the world changes, with patterns in retail changing, with demands slackening in some areas while rising in others, this town will grow and adapt to be vital, lively, alive. Their will always be those who complain, who question; and this is healthy. Yet let us do that with cool rationality. Collectively work out the best routes for the town to take, with informed decisions. Rather than the partisan squabbling of echo-chamber rant rooms, where good ideas frequently get shouted down by those with other agendas; and rather than the rather desperate attempts to use it as a divisive political tool; join the Beeston and District Civic Society.

Simple as that. They have spent 41 years tirelessly steering Beeston away from becoming a featureless Anytown. They quietly examine and investigate new proposals, and cast an expert eye on how developments will effect Beeston. They recognise the need to keep Beeston fresh, while also retaining a sense of it’s unique spirit and look. We have a lot to be thankful for them for, so if you really fancy being part of something deeply positive, join today, online.

HAPPY ANNIVERSARY TO ME. AND HELLO TO ANOTHER….

Sometime last week, this blog hit 200,000 hits. I only noticed by chance, as I don’t post on here as much as I used to. There are reasons for this: I hived the explicitly political stuff off sometime ago as I felt I needed room to talk about Beeston outside a political interpretation; I am now paid to write elsewhere; The Beestonian takes up loads of time; and the magazine’s Facebook site has been expanding fast with 1,700 readers and growing. I’m delighted that enough people have a love of Beeston to want to participate, and am proud I’ve provided forums for that for the past 7 or so years. This blog then gets rather left to the side.

Yet for those wanting a weekly Beeston fix, the excellent Robert Howard has recently set up the blog Beeston Week. Rob has just moved back to Beeston after years in exile over in Lenton, but I’ve known him for a while as he is perhaps one of the most knowledgeable people in the areas about local issues; as well as a skilled cartographer. He has been working on these excellent maps of Beeston for some time, refining, changing and redesigning  constantly. As befits the town, I suppose. Click to see it in greater detail. 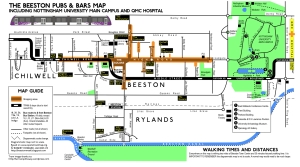 Beeston Film Festival kicks off a week on Saturday, and we’ll be running a feature in the forthcoming issue of The Beestonian, out this weekend / early next week. We entered our own documentary on Beeston; Beestonia: The Movie., and it’s been chose to open the festival, which we’re honoured by. It did leak onto the internet recently for a few hours – I blame North Korea – but we had to reel it back in as their are intellectual property issues right now. We are thinking of releasing it after the Festival for free, but until then, here is a little trailer to whet your appetite:

The Beestonian Facebook page is also running a Year of Creativity throughout 2015. We’ll be featuring a local creative each Thursday on the site, and collating them each month on a bespoke site ran in collaboration with Creative Beeston. We have a few other surprises on the way, so stay tuned. We are stuffed with all sorts of crazily creative people here, doing excellent work. I’m going to have a great time reporting on it.