Whatever the colour of their rosette, I tip my hat to those who go canvassing.

I couldn’t do it myself. Knocking on strangers doors is far too closely related to being a shy child and asking for my ball back when it’d ended up in someones garden.

I’ve shadowed politicians as they’ve gone door to door, and been amazed at how upbeat, how energetic they are. As someone who lasted all of an hour in a cold-calling job before getting fired for arguing with a ‘customer’, I marvel at the tenacity.

I was living in Tunbridge Wells during the 2001 General Election, as safe a Tory seat as you can imagine, when one sunny afternoon two dear old ladies sporting blue rosettes came seeking my vote. It was a sunny day, and I was off work, so relaxing in the garden with a copies of Private Eye, The New Stateman, a thumbed copy of Naomi Klein’s’ No Logo’, with The Fall’s Mark E Smith barking madness from my stereo. A faded and well worn Dead Kennedys T-shirt clothed my upper-half.

One of the ladies began to talk ‘Can we count on your vote on ….’ before the other chipped in ‘I don’t think he’s interested, Joan’ before moving on up the street. While not a fan of their party, I salute that dedication to the cause, and wouldn’t have minded if they wanted to chat. Similarly, I’ve let Jehovah’s Witnesses in more than once (and tried to convert them); I stop for surveys (you often get free sweets) and I always try and give the time of day to anyone who raps on my door. I had one of those Mormons in once.

Many canvassers are out now, trying to explain their parties values and plans. One, however, had the misfortune to meet this character recently:

Now, that’s pretty nasty. To gloat about nearly reducing a ‘very frail’ ‘ woman’ to tears must make you feel so empowered. Yet a fair few people liked the post. Including, incredibly, actual candidates themselves.

Who? A couple have since removed their names and written to me stating their regret, so I’ll leave them off. However, we have the following who still think it’s ok: 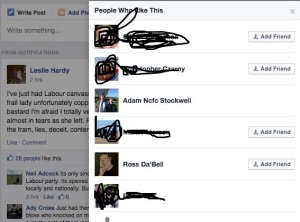 ROSS DA’ BELL: Standing for Beeston North, Ross has form in nastiness and threatening violence to get his own way. A couple of weeks back, comments he made threatening to bring a rifle to a council meeting were reported to the police by Broxtowe’s Chief Executive.

One of Soubry’s bright young things, Stockwell is an 18 year old candidate who, after spending a term as Youth Mayor, should certainly know better. He’s standing in Stapleford South East, and recently attacked me for ‘being a socialist and calling yourself a Lord’ , without a blink of irony.

The post was also ‘liked’ by Sally Brierly, staunch Conservative activist, Soubry cheerleader and partner of head of the Broxtowe Tories, Richard Jackson. When I asked her on Twitter if she condoned or condemned reducing pensioners to tears, she went into a bit of a tizz and flounced off. Does Jackon condone or condemn? Or is he too busy making wild accusations?

Well done, folks. I hope condoning the bullying ‘frail old ladies’ made you feel happy for a bit. Made you feel strong. I also hope you realise that most people feel such actions are abhorrent. The decent Tory candidates, people such as Eileen Atherton and Lydia Ball, both people who clearly love their area and behave impeccably,must be ashamed that you’re sharing the same colours as them.

If any of these candidates come to your door, canvassing, perhaps mention to them that you won’t support anyone who thinks this is proper behaviour. Ask Soubry, that defender of the nasty minority who spill bile on the Ranting Room, if she thinks this is fair.

8 thoughts on “BROXTOWE TORIES AND THEIR SUPPORT FOR THE ABUSE OF ‘VERY FRAIL LADIES’: EXCLUSIVE.”