Gutted. Utterly gutted. Fatigued after just a couple of hours sleep, disappointed, shocked and depressed. Not the night I has planned.

Still, someone is happy: 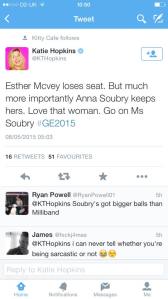 Says it all, in many ways. Soubry and Hopkins are similar people: people who thrive on division, hate, and mistaking impolite loudness for some sort of character.

What happened? Well, it really seems it was The Sun Wot Won It. And The Times. And The Mail. And The Telegraph. And, FFS, The Independent.  They realised that Labours plans to make non-doms pay their fair share would attack their proprietors, so accordingly launched an attack on Miliband that  was spiteful, borderline anti-semitic (‘ooh look: a “North London Intellectual” eating a bacon sandwich’) and utterly nasty. Fearing attacks on their own newspapers, and the opening up of the media to much needed plurality would damage their influence.

The BBC, realising that the Charter will soon be reviewed and the license fee discussed, became incredibly fearful and toed the Tory line accordingly. Thus, an open letter direct from CCHQ, purportedly from ‘small business owners, which was later found to be largely false, leads the news one night. The next, a similar letter from leading NHS doctors calling for an end to Cameron’s piece-meal  privatisation doesn’t even get a mention.

It’s hard when you get so immersed in politics to realise that other people have only a passive interest. It is important to bear this in mind when you look at the result. I don’t believe the people who voted Tory are evil, venal, and intent on ruining the NHS. I think they were scared by the press, by the relentless on-slaught of fear and paranoia directed at them.

They saw a narrative of Labour bollocking up the economy and the Tories saving it. It’s become virtually embedded. The truth of course, is much more nuanced: we had a global financial crisis. The UK was on the road to recovery in 2010, and was seriously set back by austerity (stripping us of our AAA credit standard). It has limped back into life not as a result of Tory policy, but despite. The only signs of recovery emerged after the austerity programme was temporarily scaled back.

This is nothing short of a coup against the public. the theft of public services – things WE built, WE own, that work for US are being transferred over to faceless corporations where the only concern is profit. The NHS, the BBC are next in line, The Royal Mail gone. You can forget much need nationalisation of railways. Richard Branson needs a new island.

The public voted out of fear, not hate. They are not evil, not selfish, merely were force-fed a false narrative.

What next I wrote this earlier, after 20 hours of solid blogging, just before I snatched a couple of hours sleep:

Stay positive. It looks like we will have a lame-duck government exposed massively to its own back-bench idiots. Labour will lick it’s wounds, realise that pushing austerity-lite is no vote winner and discovery its opposition fire again. A bright, strong leader to stand again a PM who will fight for every vote.

I was going to join the Greens after this election. I voted Labour but thought as the Greens reflect my views most closely, I would go to them.

Instead, I will be joining Labour later today. I want to be part of restoring that party to a proper opposition, a true force against the horrors of this gerontocracy, this plutocracy, this place where the tax-dodging press barons use hate and fear to command narratives.

We have five years of hard work ahead. Public services will be slashed. The poor, the disabled, the voiceless will be further demonised and brutalised. The rich will get richer.

But if those vile fuckers try and touch our NHS, bite their scaly, thieving hands. The war isn’t lost. its just beginning.

I stand by it, now I’ve had a rest. I’d add that we have hope in the next generation. That sounds like a cheesy Whitney Houston cover, but true. The young, raised in times of calm and prosperity during the Blair years, had little to be political about. Iraq probably lost a chunk of sympathy for Labour. The tuition fee hikes lost an even greater chunk for the Lib Dems -evidenced in the wipeout last night.

Yet we live in a gerontocracy now. The older generation have a hugely disproportionate effect on the vote due to the fact they actually vote. The youth now have to stop this. While pensions are ring-fenced, they will be denied benefits, forced into zero-hour contract jobs. If they choose to get an education, they have to take on board huge, uncertain debt to do so. Their freedom of movement will be curtailed as the UK retreats from Europe. They can never dream of owning their own house: keeping the housing market in a state of artificial over-heating is key to keeping the older generation happy and asset rich. The ladder is firmly kicked away.

Anyone who read the fantastic piece by Andre Tucker I hosted earlier this week will see  that there is growing anger, a burgeoning sense of being victimised. The Tories, governing alone, will be the sole target of this anger. In a party whose core membership is well into it’s late 60’s, with little replenishment from the other end of the generation scale, winning a  majority could be paradoxically the most dangerous thing for the Tories to have done.

Keep the faith. That is the most important thing. This is no Thatcheresque landslide. Only a million votes separate the Tories from Labour. Add in the SNP, the Greens and Plaid, and a strong anti-Tory majority is seen. Our crazy FPTP voting system masks this. But it’s clearly there in vote share.

End of this blog? In the main, yes. I’m worn out. Over the last three weeks alone I’ve written more than 40,000 words. That’s the size of an average novel. I’m also tired of the legal threats (never carried out, but worrying), the threats of violence, the negativity daring to speak out against the status quo engenders. And I’m fed up with people saying to me ‘Oh, you wrote about politics. I thought you were meant to be neutral’, as if for the last seven years I’ve scrupulously written mere transcriptions of events, with no attendent commentary. IT’S A BLOG. IT IS A PLACE WHERE I PUBLISH MY THOUGHTS, MY OPINIONS, MY ANGLE ON LIFE. HAVE YOU ACTUALLY TRIED READING IT???

I have, and I think this is where they get confused, remained totally independent throughout. Not a penny, not a favour, not even a single pint has been garnered off a political party for writing this. I’ve done it alone for the best part of a decade, with the only intention of making sure some light is shed on places that politicians would prefer remain murky. I’ve had my share of scoops, scandals and shenanigans. I’ve met dozens of politicans en-route. Generally ok people. Some utterly lovely. Some utter charisma voids (Clegg, David MIliband). Some nasty careerists. Our newly reelected. Mainly, they’re just people though. I have a grudging respect for anyone who chooses to dedicate their career to such a bizarre way of life.

I have a couple of good submissions to print up on politics, then that will be it.

I’m off on holiday next week, somewhere hot, for a few days of decompressing. When I return, I’ll have a clearer picture of what to do. Right now, I want to dedicate my time to the things that really matter to me. My wife, who I have seen far too little of late. My work on the UNESCO City of Literature bid, which I truly think could be a massive boost for our city. OXJAM, which in it’s fifth year of existence goes strength to strength, and unites this town where others try to divide, The Beestonian, which we’re expanding from next issue and continues to attract excellent writing and ideas from Beestonians all over: our Facebook page keeps surging in Likes, now close to 2,250. The Film Club at Cafe Roya, which has been having a wonderful run of form of late: raising money for local charities, showcasing young filmmakers, giving the town a place to catch film that would most likely pass them by.

I also have a follow up to the Beestonian film to get scripted and filmed, which is shaping up into quite a project.

I will still use this space to write my thoughts on, you can read them if you like. Local politics may stray into stuff, but only casually. I want to write about anything I feel. I have an article about how Zeno’s Paradox annoys and influences everything I do kicking around in my head. Definitely niche that one, and I’ll probably never actually finish it (and if you get the joke there, hello, fellow nerd).

I’ve loved doing this. I’m happy to leave on a high in terms of readership, and a low in terms of results. Hope to see you soon, Beestonians.