DISCLAIMER:This isn’t me restarting Beestonia, in case you wondered why I’d suddenly appeared months after I retired the blog. I merely had to get something written as it was bouncing round my head (to self-indulgently quote that other Nottinghamian Lord B(yron) ‘If I don’t write to empty my mind, I go mad’. It has nothing to do about Beeston, or local politics, or anything that you might normally appear here, so if you’ve came to that, sorry. This blog was set up to be somewhere to spill my thoughts when they didn’t fit in the other places I write, so in many ways this is a return to that.

There is a ship that keeps on sailing, keeps on searching for a port, throughout time. Its name changes, as does its passengers, yet it has has always been sailing, and most probably always will.

In May 1939 its name was SS St Louis, a cruise ship, carrying 937 passengers from Hamburg. The historical resonance of that 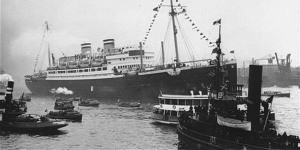 year so soon after the state-sponsored pogrom of Kristallnacht, combined with the name of a German port,with the vast majority of the passengers Jews, then I’m sure you can draw your own conclusions that this trip was not a pleasurable sail round the Atlantic, but something more desperate.

They were headed for Cuba. Here they were promised the chance to set up a new life; yet one of struggle: each permitted to carry just the nominal ten Reichmarks permitted to travelling Jews. The trip from the Old World to New was smooth, and on docking in Havana a wave of relief must have been washed through each on board.

Yet on arrival, the Cubans – the country then a US satellite state – refused entry, despite earlier promises. In the days before the ship’s docking, the Cubans had been subjected to a tsunami of horror stories about what was approaching. These Jews were not welcome. They were disease ridden. They would take over local businesses. They were cowards for

not staying to fight. The tide turned on public opinion: despite having taken in previous ship fulls of passengers, this was refused, driven by political propaganda. The truth on the refusal, as always, is much more nuanced. The refugees were refused as President Federico Laredo Brú had noticed diminishing financial returns from giving safe haven: these new Jews simply didn’t have the money to buy themselves safety. .

Stuck in port, the ship began to resemble less of a pleasure liner and more the concentration camps that many of the passengers had already spent time in. In limbo, two tried to commit suicide, both unsuccessfully. When one has nowhere, has nothing, one has nothing to live for. American journalists gained access: the headline ‘The Ship That Shamed The World’ . Yet public opinion in the US and elsewhere was subject to a torrent of misinformation, thinly veiled racism and sheer hate and fear: in the UK, The Daily Mail, which had throughout the thirties championed the Nazis ( the then propreitor Lord Rothermere, grandfather of the present owner, had written to Hitler a few months before,  ‘Frederick the Great was a great popular figure in England. May not Adolf the Great become an equally popular figure? I salute Your Excellency’s star which rises higher and higher.’ ) Jewish refugees were described in terms usually described for vermin: ‘hordes’, ‘swarms’ . They were alien;parasitic; they were different; they were other. Criminal, diseased, mercenary.Invaders, frauds, the enemy.  Such was the fear stoked, when Austria was annexed by Germany in 1938, rather than offer asylum to Austrian Jews now facing persecution, they instead made it effectively impossible for Austrian Jews to enter the UK. 65,000 Austrian Jews were subsequently murdered in the Holocaust. Even the leftish, liberal papers were in on it, the Observer falsely reporting on the same issue that  there were more Jews in Britain than Germany ever had. Driven out of their home, and resentment stoked across the globe, the only place deemed fit for the Jews was to drift on the sea.

And how they drifted. First to Miami, where what seemed like a flotilla of welcoming ships proved, as they drew closer, to be a fleet of gunships to repel any attempt to dock. The British government offered entry, but only if the St Louis first docked back in Hamburg. As the German press at the time was running editorials stating ‘If the Jews take up their safe passage to Germany, then they should be accommodated at Buchenwald or Dachau’ this was almost sadistic in it’s terms. If nobody in the world wants these Jews, then why should they be concerned with what we do with these undesirables?

The ship inevitably drifted back towards Europe, a continent on the brink of war and genocide. Eventually, it docked at Antwerp, where Nazi sympathisers handed out handbills at the harbour proclaiming ‘We too want to help the Jews. If they call at our offices each will receive gratis a length of rope and a long nail’. From there the story of the passengers is impossible to tell, but easy to guess. Belgium would fall to the Nazis soon after.

Those boats have never stopped sailing: from Korea, from Vietnam, from Iran and Irag and Syria and Afghanistan; from

failing African states; overloaded with persecuted stateless Kurds; hunted Kosovans; dissident Russians. They wash up on our shores and we see them as a problem, a deferred problem that we have no responsibility for. Yet we continue to invade countries, intervene in conflicts, sell weapons to anyone who will take them: no questions asked on how they will be used, or upon whom. When the fall-our rains back on us, we shrug our shoulders, we wash our hands upon them. The world has never been more globalised; yet we still refuse to face up to this in terms of people, just products. They are other, they are cost, they are danger. The moment we allow them to be seen as humans, scared, desperate, willing to board that flimsy boat knowing that to not do so is oppression, imprisonment and death, that’s the moment we have to accept the problem. A problem we won’t ever help by pretending we’re not part of, that we sail this ship together. Instead billions are earmarked for Trident, money that could be better spent working on smoothing the waters, understanding the problems, helping those lost at sea to safe port. Yet that would require a sea-change to the status quo: so we sail on.

This is all easy to write with the benefit of hindsight. Yet as the ship keeps drifting. Nearly 80 years the SS St Louis still sails on, now in the form of the thousands of flimsy dinghies washing up at Lampedusa, Kos etc.It still hasn’t found a port, and maybe never will, destined to drift, a pariah ship of those unfortunate by birth or association; but ultimately us, a species lost on its own dark oceans of fear.