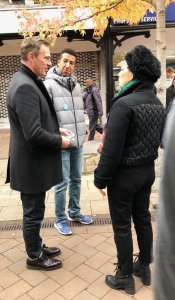 The weekend saw candidates descend on Beeston, with the Brexit Party taking a pitch outside Hallams, Anna Soubry’s Change for A Cup of Tea Party (subs, please check) outside Sue Ryder and the Liberal Democrat Party – well, just getting a bit of fresh air really, since they’re barred from standing.

It was the Brexit Party’s first proper unleashing of their new candidate, Calvin Robinson, who turned up with MEP and PPC for Ashfield Martin Daubney, who less lucky readers will know as the Men’s Rights Activist idiot who edited Loaded Magazine (and effectively killed it off by getting it’s circulation down to 10% of what it was when he took over).

Yet it was all for nowt. Nigel Farage, that believer against the odds in the impossible; that patriotic stalwart of standing your ground; that not at-all chicken opportunist spiv bottled it. Pulling out all the candidates to seats won by the party whose Brexit stance is still described on their website as “The Prime Minister’s deal is not a proper Brexit…reheats 95 per cent of Theresa May’s deal…..Can any Brexiteer inclined to support this Treaty honestly say that it amounts to a proper Brexit?” Well, Nigel can, and now Calvin can, and funny how someone as steadfast in his opinion as Nige is can disintegrate so thoroughly when the Daily Mail throws a bit of criticism at him.

So Nige and Calvin out the race, the Lib Dems in enforced hiatus and Lord Biro at last getting his signatures to enable him to run, we are beginning to see the candidate slate take shape before the 14th November deadline.

We will be with you all the way, with the side of the campaign you won’t find anywhere else. We’d love it if you chipped in a few bob to help us do so – we’re all independent journalists and not in the pay of a political party/ lobbyist / media mogul. A few quid will do wonders, and keep local journalism keeping you in the know: click here to keep us running.

Now, over to Chris Tregenza for a look at what’s happening with the neighbours. Lord Beestonia

While Broxtowe is clearly the most interesting constituency in this election, we should spare a thought for our neighbours.

This Will Make The News 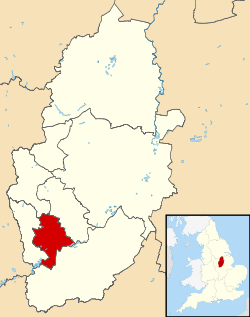 A seat bound to receive national attention is Ken Clarke’s old seat of Rushcliffe. Uncle Ken won this seat for the Tories with 50% of the votes two years ago yet the results in this seat will define the election. Despite coming 3rd with just 4% of the vote last time, Rushcliffe is in the Lib Dem’s top ten target seats.

Rushcliffe is predominantly wealthy and suburban, and the only area of Nottinghamshire to vote remain in 2016. Just the sort of voters who will be attracted by the Lib-Dem’s small ‘c’ conservative-but-remain sales pitch. Throw in the way Boris Johnson treated the much respected (and arch-Europhile) Ken Clarke and there are a lot of disillusioned Tory voters. Labour came 2nd in 2017 (25%) but there is no way Conservatives are going to vote for Corbyn.

The local Labour party realise the threat the Lib Dems present and despite previous being pro-Corbynite leavers, they are now campaigning as remainers. This won’t win them any new votes but may stop the hemorrhage to the Lib Dems.

And there is the crux of the issue. If the Lib Dems can convince remain-Labour and remain-Tories to vote for them nationally, Boris Johnson will fail to get a majority and the Lib Dems will have 50 seats. However, their tactics may just split the vote and let Johnson back into Number 10 with a clear majority. Rushcliffe is the bellwether for the nation.

The three safe Labour seats around Nottingham will be pretty dull – Nottingham East,

Nottingham South and Nottingham North. However Nottingham East candidate Nadia Wittome is a stand-out Labour candidate. Standing in Chris Leslie’s seat (who is also contesting it), Nadia is young, female, non-white and most importantly smart. She is also a strident left winger who believes passionately in free movement and the EU. So basically a poster child for the progressive left. With Chris Leslie unlikely to pick-up more than a few thousand votes, Nadia should be shoe-in and one to watch in the new Parliament.

Gedling – Held by Vernon Coaker since 1997, Gedling has a near 5000 majority. Expect to see that cut but if Labour loses Gedling then Corbyn is in a whole heap of trouble. In Newark, Conservative Robert Jenrick with his 17,000 majority in a strong leave area will not be wearing himself out campaigning this year. So you can forget all about Newark, just like us city folk normally do.

Things get interesting in the north of the county with three unpredictable battles in an area which voted 70% leave.

Mansfield unexpectedly fell to the Conservatives in 2017 after being Labour for 80 years. It was one of Theresa May’s few success stories and represents the type of seat the Conservatives hope to win from Labour. Evidence from online advertising suggests Boris is aiming to secure the rural Labour leave vote to replace all the seats he will lose in urban remain areas. However, sitting MP Ben Bradly is not the brightest spark and his victory last time had more to do with local politics than brilliant campaigning. This election is a simple two horse race and expect a photo-finish.

John Mann sold his soul to the Tories for a peerage. Coupled with one of the highest leave votes in the country and there is a good chance it will go Conservative. Something made much more likely because Bassetlaw Labour’s candidate was barred by Labour HQ and bitter in-fighting has broken out. A lot depends on how many of the area’s farmers have realised Brexit will be a disaster for them.

Ashfield’s out-going MP, Gloria De Piero, started political life as a Blairite remainer but pivoted to Corbyn’s hard-left leaver stance. I’m sure with her 441 vote majority, Gloria was absolutely confident of winning and the decision to step-down had nothing to do with the complete collapse of the Labour vote in the EU and local elections. In the latter, the Ashfield Independent Party (created by someone kicked out of the Lib Dems) took 30 of the 35 seats on offer. Now the council leader Jason Zadrozny is standing as MP and is suddenly a very vocal Brexit supporter so he is a real force to be reckoned with. The Brexit Party is also targeting this seat and it’s certainly on the Tories long-list so the Ashfield race is totally open.

In our beloved Broxtowe we have a 2.5 horse race. Labour versus Conservatives with an

Anna Soubry wildcard. Labour are favourites but a lot depends on the manifesto. The more remain-oriented it is, such a commitment to free-movement, the more likely remain voters will go to Labour as the least worst option. However if Corbyn keeps on about respecting the referendum, there will be an exodus to Soubry. With the Brexit Party Ltd., candidate standing down it’s totally impossible to predict. Best keep reading this blog then… Chris Tregenza.