Yesterday’s piece on the Broxtowe Conservative civil war has thrown up a couple more serious allegations: these are being verified and we’ll have a further story up soon. In other news, YouGov have looked at Broxtowe and calculated that barring a miracle, Anna Soubry will not be our MP on December 12th. While the best performing of all the Change candidates, that’s much the same as being the most sober drunk. She’s failed to create a substantial position, despite the Lib Dems stepping aside to aid her cause. We are  very much are a straight up two-horse race now, and watch considerable resources flowing into Broxtowe to take the seat.

Will Soubry even beat the Greens, who could pick up a strong protest vote-share and gain third place? It’s too early to tell, so instead we asked Chris Tregenza to cast his critical eye over their latest leaflet. Is it a winner? Should it go straight into the recycling bin? Over to Chris… Lord Beestonia

Politics By Design – Judging politicians by their leaflets. No: 6. Kat Boettge – The Green Party 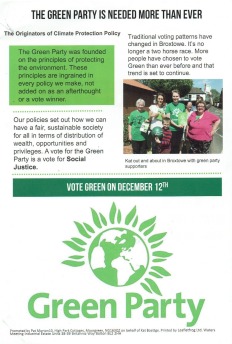 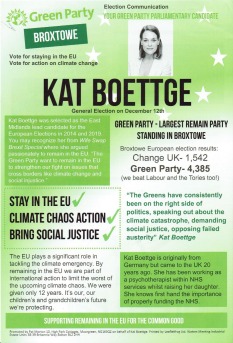 Overall: As a design nerd, what jumped out to me is the odd choice of paper size. A sort of tall A5, close to but not actually C5. To ordinary people, what will strike them is the colour.

Colour Use: If your party is called The Green Party there is only one way to go and this leaflet doesn’t disappoint. We have light greens, dark greens, gradated greens – at least five different distinct shades. It certainly leaves you no doubt who the leaflet is from but the designer lacks the ability to make it work.

Typography: Oh god kill me now. To be fair, nearly all the text is clearly readable and that is the number one goal of all typesetting. More professional designs from other parties have fallen short on that particular issue. Where this leaflet comes apart is on alignment, font-sizing, margins, padding and consistency. I’m pretty sure the leaflet was typeset in Microsoft Word and it is really hard to get something decent from that heap of shit but even so.

Images: On the front is a nice professional black & white shot of the candidate (other candidates please take note). However it’s haphazardly placed and out of alignment with any other element on the page. The back has a photo of Kat with supporters adding the only non-green colour to leaflet but please, please, please, candidates, please – if you have a group shot, make sure the candidate is front and centre of the image.

Also on the back is one of the images which tells me this leaflet was designed by someone without any experience. It’s a Green Party logo occupying a third of the page. This shouldn’t be a problem but the designer makes the beginner’s mistake of taking a small image from the internet and scaling up for use in print. If you don’t understand why this is a problem, please don’t ever design a leaflet.

Truthiness: There is little here in the way of policy or claims so nothing to fact check.

Message: The leaflet limits itself to three issues – remain in the EU, environmental action and Kat the person. This is a good tactic and better than the Labour or Tory leaflets which have tried to say too much and end-up saying nothing. However it is let down by the execution which is haphazard and scattered rather than one clear narrative. I must also point out that, as a Guardian reading, musili-eating lefty (i.e. the target market), the fact Kat was on Wife Swap, even a Brexit special, is not a selling point.

Summary: Good ideas but unable to deliver any meaningful impact. So sums up the Greens nicely.

One thought on “Politics By Design – Judging politicians by their leaflets. No: 6. Kat Boettge – The Green Party”