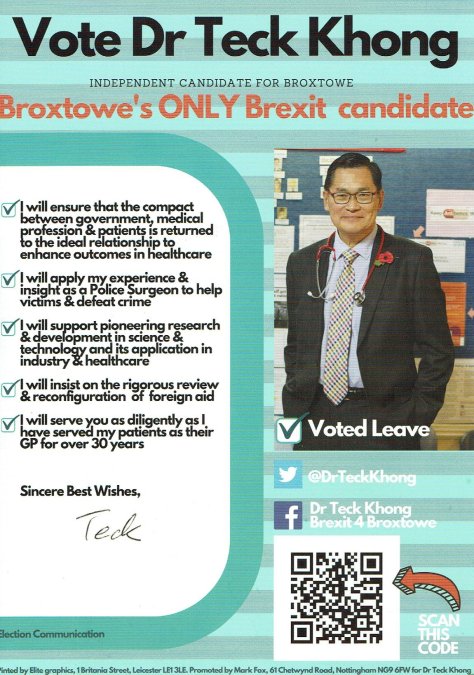 The leaflet’s ambitions are fatally undermined by the lack of knowledge (in design) of those behind it. Potentially good ideas are poisoned by a heavy-handed approach and lack of overall balance.

The dominant colour is confidently but unhelpfully identified as Tradewind by my colour spotter app. A dodgy greeny-cyan is a more human but only slightly more useful description. The strong border to the white-space is offset by a striped background in variant grey/green shades which, as a palette, is actually quite good. However, while Dr Khong’s take on colour is more subtle and sympathetic than you’ll tend to see from his end of the political spectrum, the end result is an ugly mess.

Life and design are very similar in many ways. Sometimes you have an idea which seems foolproof but when reality hits with all its details and little awkward problems, everything turns into a mess. Of course I’m referring to the striped background to Dr Khong’s leaflet. It’s a genuinely imaginative approach, providing an easy way to bring cohesion to the overall design but the doctor chooses ride roughshod over it in favour of his own limited and badly executed ideas. From the ham-fisted approach (to bolding) and the complete failure to understand technical issues (such as font size versus line-height); to misguided ideas about how to integrate white with colour (text), this leaflet is awful.

There is only one image, a badly cropped but otherwise good photo of the man himself. Notably the working GP has a stethoscope around his neck. In normal advertising, that’s illegal because the use medical props to sell unrelated products has been abused by unscrupulous people to do untold harm to consumers. Now, election leaflets are not advertising as such so it’s legality is a complex subject. I wonder whether Dr Khong carefully did his research and spoke to experts to check everything would be OK or did he simply go ahead in total ignorance of the potential pitfalls.

There’s not much here apart from vague statements with no explanation of how they would be implemented. Though potential voters should note that while he is only “for” brexit and can merely promise “to work on” homelessness, he is confident his experience as a police surgeon will allow him to “defeat” crime.

The leaflet’s message is “Hi, you’ve never heard of me but I’m appealing to all the small-minded little-Englanders who wanted to vote for Farage”.

Listen to expert advice and think things through or otherwise you’ll end up with this mess.