I want to reassure you that I will be a prime minister for everyone, not just those who voted for me.

So said Boris Johnson shortly after his December win. With the country cleaved by the referendum, and a full-on culture war underway, it seemed an unlikely proposition, but one that should at least be given a chance.

That message doesn’t seem to have reached Broxtowe, however, and the office of new MP Darren Henry. While Henry himself comes across as an equitable chap – I had a drink with him shortly before the election and it was only when we came to political issues we found any friction between ourselves – it seems those he surrounds himself with are not on board with the whole One Nation thing.

First, let’s go back a decade, and the election of Henry’s predecessor Anna Soubry.

Before the election she made several promises she subsequently broke on taking office, notably on the subject of employing party members to her office. Nope, she’d take on a local.

Didn’t happen. She appointed a character named Craig Cox, who wasn’t just an activist but one involved in the abusive bullying Conservative Future group that was disbanded after a fellow University of Nottingham student committed suicide after intense bullying.

Cox had form: he’d been investigated by the police for racism after attending a student meeting with a placard demanding ‘Bring Back Slavery’. For the LOLs, of course.

The Guardian picked up on my reporting and soon Cox was out, and a subsequent attempt to take over Conservative Future failed due to his poor reputation.

Soubry’s promises of ‘being the MP for all constituents’ rang hollow when she gave an interview saying she got into politics ‘to fight lefties’. Not to make the world a better place, correct injustices, etc. To fight lefties. Unsurprisingly, when she appealed to the left to vote for her in the collosal mis-gamble vanity project that was Change Independent UK (subs please check) they weren’t fooled.

So will Henry be a breath of fresh air, and reach out to all constituents?

Not if one of his first acts is to count for anything.

During the election, an individual named Carl Husted was bought onto the campaign, with one email stating he was ‘campaign manager’, a status strongly denied by Henry.

He has quite a history: arrested over possession of cocaine; calling his native Wolverhampton (where he probably first met Henry) ‘full of scum’, and when attempting to be a Tory councillor on Nottingham City Council compared Remain voters petitioning for a second referendum as ‘Nazis’. Nice guy. That saw him suspended from the Conservatives, though, as the excellent @matesJacob Twitter feed shows, that amounts to little- the worst bigots are generally quietly readmitted a few weeks later.

Henry told me at the time ” (Husted) is not my Campaign Manager but someone who has volunteered to distribute leaflets and his short suspension is over now anyway”.

A few weeks after the election, and who should appear on a tweet? 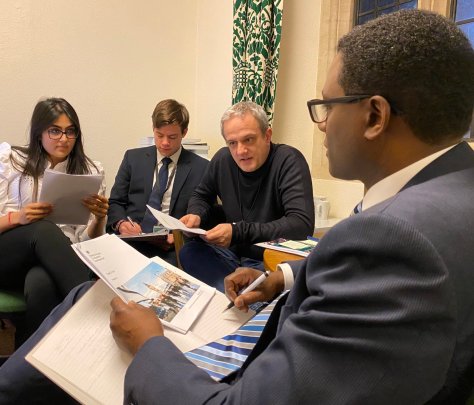 That’s Husted (third left) and after a little bit of digging I hear he’s to be the office manager for Henry. Not a local, not a truly fair figure who would help every constituent equally, but a divisive and nasty crony of Henry’s, paid for by the taxpayer.

I asked Henry for a statement in response to my inquiries into Husted, who has even managed to alienate swathes of his own local party: “Carl was a volunteer during my campaign. He is a member of the Conservative Party. I am also hoping to have him onboard as my office manager in the Constituency”.

This isn’t exactly trying to ‘heal the division’. This has the hallmarks of another parachuted MP taking office and putting career before constituents, and effectively decided some constituents are more important than others. Husted’s choice of language on Muslims- comparing Labour voters to ‘Jihadis’ – is going to make it difficult for those of that religion to approach his office for help.

It’s a depressing start. If Henry wants to convince a sceptical Broxtowe that he truly wants to heal division, it’s time to ditch Husted.